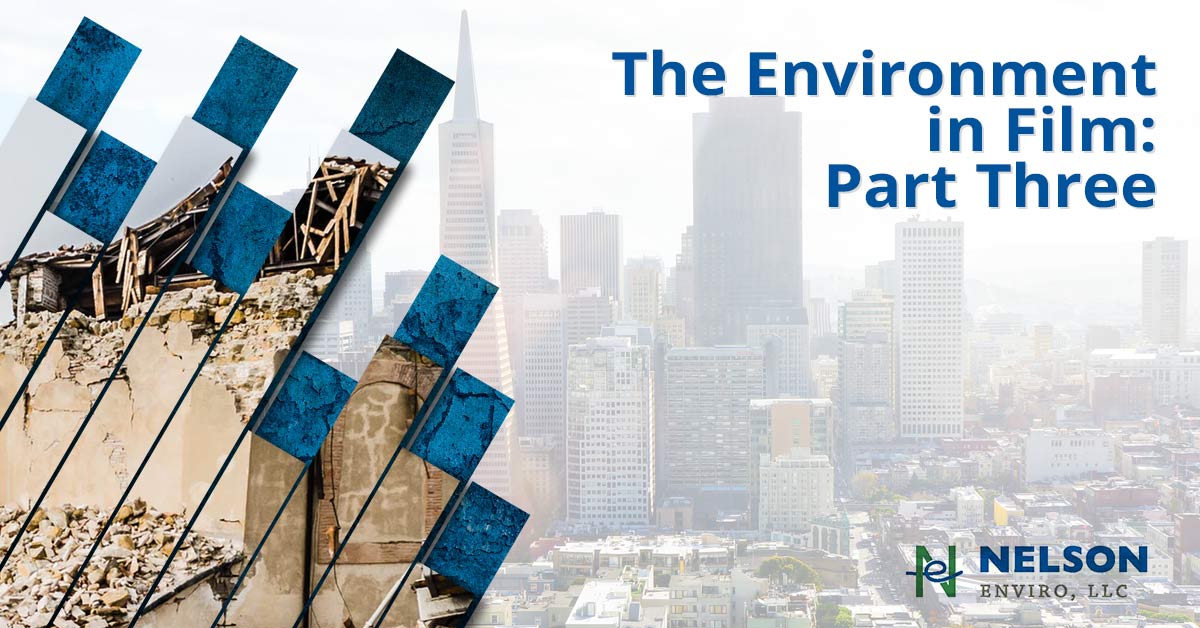 Perhaps you’re in the market for a Phase I Environmental Site Assessment and you’re looking for a well-respected company to ensure that everything gets done the right way the first time around. If that’s the case, you’re in the right place! On the other hand, you might be here for our look at how the environment is portrayed in films. We’ve already written about this very subject in part one and part two of our series.

In this post, we will conclude our series by taking a look at two films that are very different than any we’ve discussed before. What will fill out the final two spots on our list? Keep reading to find out.

Our Final Two Movies About the Environment

If you’re a fan of Dwayne “The Rock” Johnson (and let’s be honest, who isn’t a fan on some level or another?), you might really enjoy San Andreas. Written by one of the writers responsible for the television show LOST, this is a film that received mixed reviews from critics. The Internet Movie Database sums up the plot quite nicely by saying that “in the aftermath of a massive earthquake in California, a rescue-chopper pilot makes a dangerous journey with his ex-wife across the state in order to rescue his daughter.” Are earthquakes and the environment portrayed accurately in this movie? Well…let’s just say that we’ll let you be the judge.

Although the critical consensus was far from unanimous, many found the cast amazing. Various reviews over at Rotten Tomatoes note that “it’s enormously entertaining, thanks to the undeniable charisma” of The Rock, and that “you could do worse than watch the undeniably appealing Johnson try to save the day while uttering the silliest dialogue imaginable.” We couldn’t agree more!

Although you’re sure to roll your eyes a time or two, it does at least remain entertaining from beginning to end.

The Revenant, although significantly different from San Andreas, is no less entertaining. Directed by Alejandro Iñárritu and starring Leonardo DiCaprio (in a performance that would win him an Academy Award), Tom Hardy, and Domhnall Gleeson, Wikipedia describes the film as a “semi-biographical epic western film” that describes “frontiersman Hugh Glass’s experiences in 1823.”

Like many westerns, the film showcases nature in a rather stunning way with wide shots and beautifully lit scenes from beginning to end. Perhaps most interestingly is the fact that the films cinematographer Emmanuel Lubezki shot the film entirely using natural light without the help of any lighting systems.

The film perfectly tows the line between beauty and violence as one man fights to survive against other men, bear attacks, and an incredibly harsh wilderness. Rotten Tomatoes sums the film up quite nicely: “As starkly beautiful as it is harshly uncompromising, The Revenant uses Leonardo DiCaprio’s committed performance as fuel for an absorbing drama that offers punishing challenges–and rich rewards.” We couldn’t have said it better ourselves. If you haven’t seen this movie yet, be sure to make it one of your top priorities.

Are You In Need of a Phase I ESA?

We sincerely hope you have enjoyed our look at the environment’s portrayal in films. Whether you’re a film buff and you’ve seen them all already or you found us because you’re in need of a Phase I Environmental Site Assessment, we’re glad you’re here.

If it’s the latter you’re interested in, the team at Nelson Enviro would be glad to help. We happily serve small businesses, real estate professionals and investors, the banking industry, agricultural operations and more in Northern and Central California. We have been providing site assessment reports for over two decades and in that time, we’ve helped a number of people to have the assurance that they need knowing any secrets that the land they are considering purchasing may have been hiding.

Our environmental enquiry services and reviews are both cost-effective and thorough. Regardless of your situation, you can count on us to provide you with the help you need to make the right decision. Contact the team at Nelson Enviro to start the process. You can rest assured that you’re in good hands! Reach out today. We look forward to hearing from you!

What We DoPhase I Environmental Site Assessments
How We Can HelpLearn More About Nelson Enviro LLC
Why Hire Us?People Appreciate Us