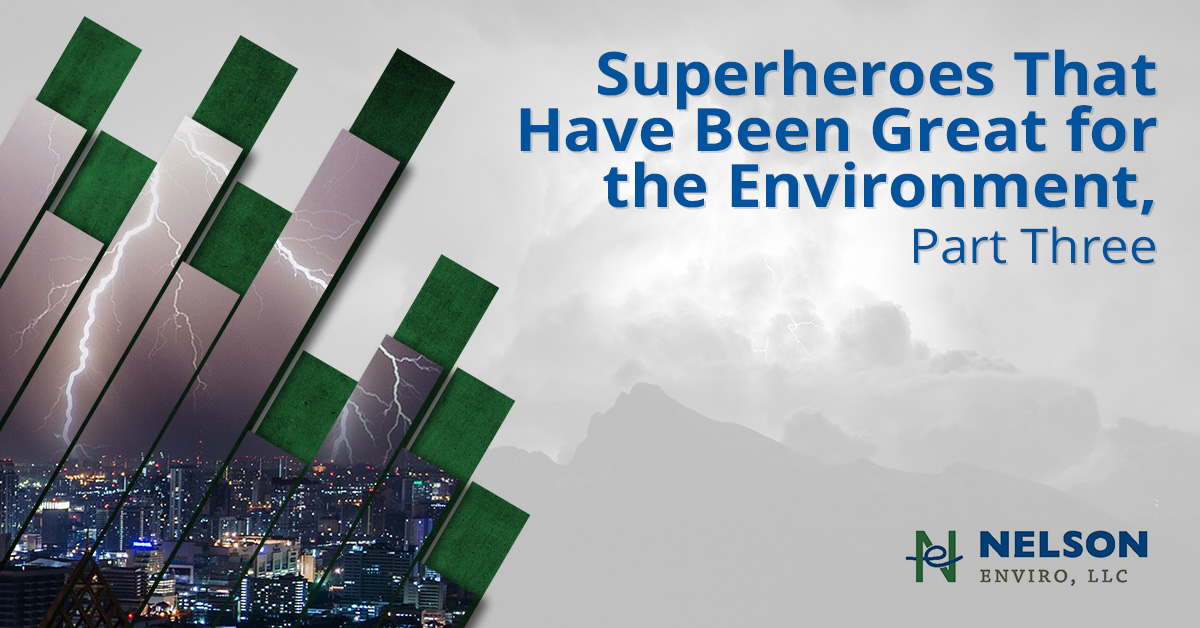 At Nelson Enviro, we’re known for offering Phase 1 Environmental Site Assessments (ESAs), but if you’ve been following along with our blog for awhile, you might remember a couple of blogs from all the way back in November that were about superheroes that were great for the environment. You might even say that we’re known for offering Phase I ESAs and knowing a thing or two about comic books. In those posts from back in November, we highlighted some of the more obvious choices like Superman, Swamp Thing, and Captain Planet as heroes who made sacrifices for the environment.

The success of Marvel films this year already, with Black Panther having pulled in nearly $1.5 billion at the box office and The Avengers: Infinity War boasting an amazing $2 billion, has caused more people than ever to develop an interest in Marvel comics. And so we’d like to introduce the unlikely hero of today’s blog. Who will we be highlighting? Keep reading to find out!

The Superhero Who Was Unexpectedly Caring of the Environment

The hero in question is none other than Thor: God of Thunder. Even if you only look at the surface level, Thor still cares a great deal for the environment because he’s fighting to save the planet from any threats that come against it. Take a deeper look at the comics and you’ll see that Thor has a great deal of respect for Earth (known to him as Midgard) and its inhabitants.

The event in question that shows just how much Thor cares about the Earth comes when he’s called to defend it against a corporation called Roxxon. In Thor: God of Thunder, the CEO of Roxxon seeks to destroy the town of Broxton, Oklahoma; the reasons are too complicated to go into in a short blog post, but one thing to note is that Asgard’s current home is floating just above Broxton.

Over time, Thor develops a relationship with the people in the town, visiting the elderly in nursing homes, joking with waitresses at the local restaurant, and going to the bar with the volunteer fire department. When the city comes under threat, Thor conjures a storm the likes of which the world has never seen to destroy the Roxxon facilities that are causing the most damage.

How does it all turn out in the end? We won’t spoil it for you, but if you care to find out for yourself, be sure to check out Jason Aaron’s exceptional run on Thor: God of Thunder!

Are You in Need of a Phase I Environmental Site Assessment?

Would we call ourselves the superheroes of Phase I Environmental Site Assessments? We might not go quite that far, but what we will say is that if you’re in the market for a Phase I ESA, environmental consulting, or even a desktop review, we’d love to help.

At Nelson Enviro, we have several years of experience in ensuring that our clients know exactly what secrets their land is hiding. Check out our list of frequently asked questions, or if you’re ready to schedule an appointment, contact us today. We look forward to hearing from you!

What We DoPhase I Environmental Site Assessments
How We Can HelpLearn More About Nelson Enviro LLC
Why Hire Us?People Appreciate Us